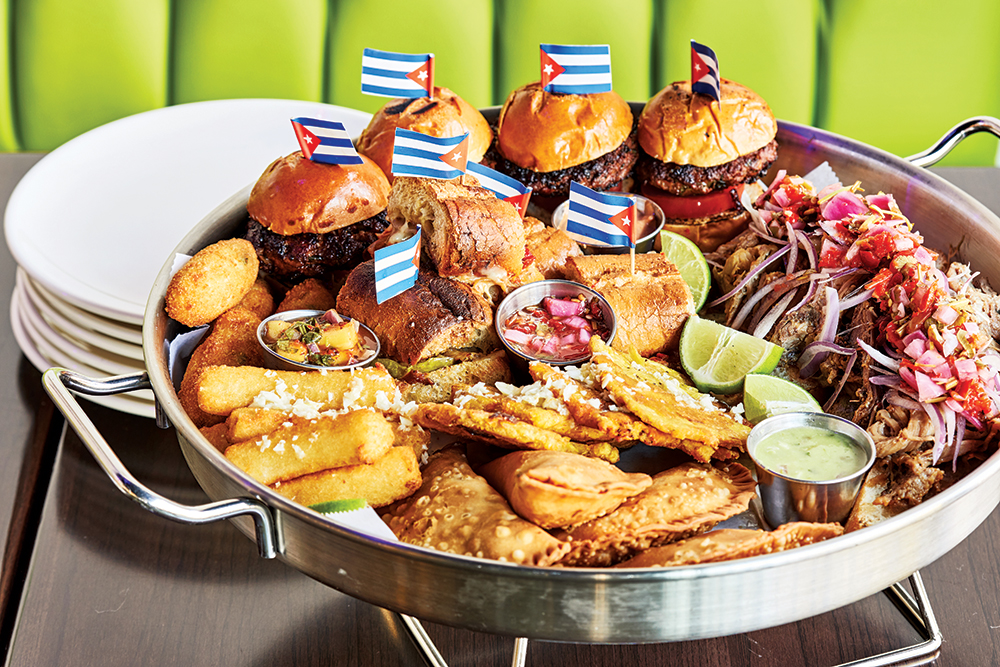 A server carries a Dutch oven through the lively, clamorous dining room of El Sapo Cuban Social Club, the thrilling new Silver Spring restaurant that Urban Butcher chef and owner Raynold Mendizábal opened in October. After he sets the pot on the table and removes the lid, alluring aromas of its contents—four meaty oxtails, orange slices, cherry tomatoes and a tangle of oregano stems mingling in a dark, rich braising liquid—seduce the diners who ordered it.

A few tables away, manager Judita D’Oliviera ignites a sky-high sparkler attached to a bottle of cava and starts singing “Happy Birthday” to a celebrant. Salsa music fills the air, and throughout the dining room, whether they realize it or not, patrons are moving their shoulders and tapping their feet to the rhythm of the beat.

Mendizábal, a Cuban native who lives in Silver Spring, calls El Sapo a social club rather than a restaurant because he wants guests to experience Cuba’s culture. “The music, the colors, the food, the laughter—I want everyone to feel a part of it, to sing, to spontaneously get up and dance. We want it to be contagious because our culture is contagious,” he says.

The welcome mat at El Sapo says “entra bailando” (enter dancing), and, if you follow its foot diagram for salsa steps, you will. At the host stand, there’s no host—just a musician and his keyboard, jamming as D’Oliviera walks up and greets you.

El Sapo, which occupies the ground floor of the recently built Central Silver Spring development, is basically a big concrete box. It’s so loud (93 decibels, “between motorcycle and food blender” on my phone’s Decibel X app) that you may leave hoarse and with your head ringing. That drawback, in my book, makes the experience a three-run home run instead of a grand slam. Go warned and yield to the fun.

Mendizábal, 48, is a Havana-born academic in mathematics and physics who left Cuba on a raft when he was 24. He was picked up at sea, spent a year in a refugee camp in Guantanamo Bay and arrived in the United States in 1995. He wound up in Pittsburgh, where he rose from dishwasher to cook in the restaurant business. In 2000, he came to Washington, where his career included chef stints at Pesce restaurant and Fujimar. He opened Urban Butcher in Silver Spring in 2013.

Sapo is toad in Spanish and represents good luck to Mendizábal. The Chinese introduced a lottery game in Cuba called la charada china, in which 36 numbers correspond to 36 various animals and objects. In the game, the number 22 is the toad. “I came to the U.S. on Oct. 18, 1995, and signed a lease on Oct. 18, 2017, 22 years later,” he says.

Giant glass garage doors that can open fully comprise two sides of the building. The club seats 100, plus 60 to 80 more in good weather when the mojito garden and patio are open. Design elements include tufted lime-green banquettes, a mural of a lively party scene and large decorative crosses made by D’Oliviera, mirrored wall sconces with flickering candles, and fuchsia and lime-green accent walls.

The menu here shows that Mendizábal has a keen understanding of marketing, with categories that highlight today’s popular trends: cocktails, ceviches, street foods, small plates, home cooking and entrées for two. On many tables you’ll notice whole coconuts branded with El Sapo’s name. They have large holes cut into their tops to turn them into drink receptacles for saoco cocktails made of fresh coconut water and Bacardi coconut rum. Having one easily leads to two.

You will also notice at other tables that many diners have ordered large Chúpate los Dedos (lick your fingers) platters perched on stands with little Cuban flags poking up from their contents. These are sampler assortments of the menu’s six street food offerings—empanadas; salt cod croquettes; puerco asado (Cuba’s national dish of slow-roasted pork in bitter orange sauce) on grilled bread; tostones (plantain patties); spicy beef burgers; and fried yuca batons—plus a Cubano sandwich (a hot pressed ham, cheese, roast pork, pickle and mustard sandwich) with french fries. The platter serves four for a hefty $78, but you can order its components à la carte. Don’t miss the flaky empanadas filled with picadillo (a thick, cumin- and cinnamon-infused sauce of ground beef, capers, olives and raisins) and the crispy, garlicky yuca (like steak fries, but starchier), which you should dip lavishly in the bold, verdant mojo sauce of jalapeño, vinegar, garlic, olive oil and cilantro. I also advise ordering as a starter the exquisite side dish of pan-blistered whole okra pods tossed with roasted garlic and lemon and lime slices.

Mendizábal wisely keeps things simple with his ceviches, which are put together to order rather than prepped ahead to wither in their citrus marinades. I give two of them high marks. Razor-thin conch slices, red onion slivers and cherry tomatoes tossed with orange and lime juices and a hit of fiery habanero pepper have a perfect acidic brightness. Bay scallops, cubed mango, red onions, red peppers and cilantro get tossed in lime juice and coconut milk, bringing forth the mollusk’s sweetness.

For main courses, I reiterate praise for the oxtails, brined and braised until the meat falls off the bone but still preserves some bite. Goat meat—dried into jerky and braised into a thick stew with honey, cumin and chopped onions, green peppers, tomatoes and garlic—becomes a topping for creamy polenta-like tamal in what is a luscious, hearty casserole.

Some dishes don’t hit the mark—overcooked, overcharred grilled salmon can’t be saved by its pineapple and red pepper salsa. Head-on, shell-on tiger prawns in a thick tomato and olive sauce are mushy and too messy to eat. Churros for dessert are undercooked and pasty. Opt instead for creamy pineapple crème brûlée with its crunchy sugar armor. Or, better yet, have an espresso-laced cortadito martini or a shot of aged rum before you head out the door, dancing.

David Hagedorn is the restaurant critic for Bethesda Magazine.