This Cuban chef knows how to get the party started

This Cuban chef knows how to get the party started 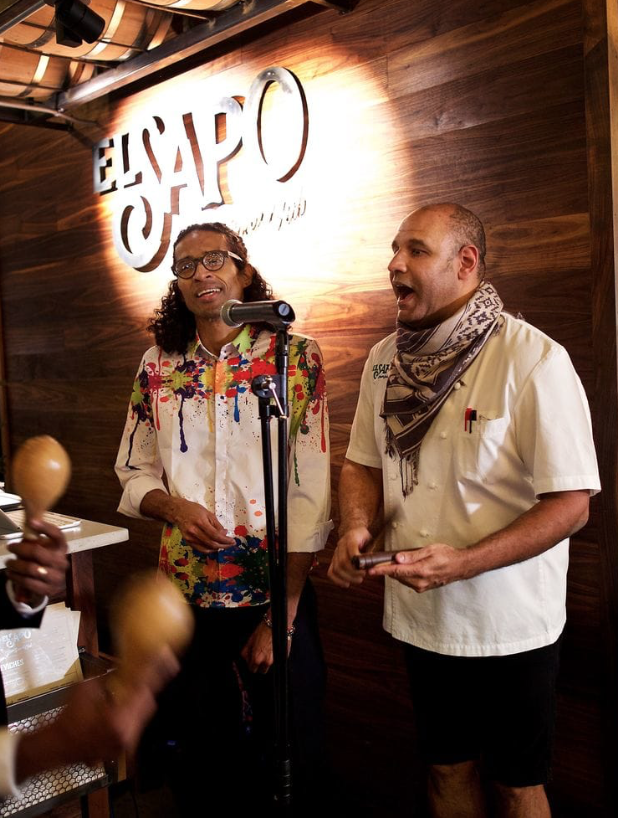 More than once since El Sapo Cuban Social Club opened in Silver Spring in October, I’ve wondered if its chef and owner, Raynold Mendizábal, cloned himself for his latest project. One moment, he’s behind the counter of the exposed kitchen, watching over the food with laserlike focus. Another time, he’s an impromptu musician, joining a live guitar player with some maracas. When I request a Manhattan de Miami, the rum-and-vermouth base of which is stored and mellowed in an oak cask at the bar, who do you suppose brings the signature drink to the table, where he measures out the spirit and garnishes its glass with a peel of orange he slices himself?

Mendizábal, who continues to run Urban Butcher, the meat-centric restaurant nearby, seems to be everywhere in his most personal dining statement to date. You may have had his food elsewhere. The self-trained chef, 48 this month, came to Washington in 2000, where he focused on seafood at Pesce and later worked for Latin Concepts and the late Lima. El Sapo is a coming out of sorts. “I wanted to be a chef first, a Cuban chef second,” Mendizábal says. Mission accomplished, but a taste of his roasted pork with bitter orange or shrimp jazzed up with sofrito makes me wish he hadn’t waited so long to part the curtain and display the full range of his talent.

This is not a varnished tale about how a kid from Havana learned to cook Cuban food at the hand of his grandmother. For one thing, his grandmother wouldn’t let him in the kitchen to watch her, so he learned to re-create her efforts by flavor alone. For another, Mendizábal left Cuba in a raft jiggered from an inner tube in 1994, headed for what he thought would be the United States. The U.S. government had other plans, intervening at sea and sending him to a refu­gee camp in Guantanamo Bay for a year and a half. Upon release, the self-described math geek went to Pittsburgh to pursue a life of academia, supporting himself as a dishwasher in a Mediterranean restaurant.

At Guantanamo, Mendizábal says he learned “life has so many colors!” At his first stop in the United States, he realized he “needed a bigger city.” Like a kid chasing after the circus, he left the university for a restaurant life, and Pittsburgh for the nation’s capital.

His new roost practically dares you not to join the nightly party. Shades of green, the color of life, lend a sense of place, and glass garage doors are just itching to be rolled up as warmer weather arrives. Decorative crosses draw eyes to the rear wall.

Rethink any plans to have a heart-to-heart or catch up with grandparents. If there’s a downside to dinner, it’s a sound reading that puts the audience in the middle of a jam session. Then again, this is a restaurant that makes you want to shout for joy, clap your hands or beat the conga drum at the entrance. Who can protest the noise when the chef takes your mother’s hand for an impromptu twirl around the floor — and your mother the dancer looks as if she might send you home ahead of her? More encouraging, the crowd in the vibrant dining room is as mixed as I’ve seen anywhere in Washington. Preach, Silver Spring!

Every aspect of a meal, from opening drinks to closing desserts, has been thought out. The liquid thrills don’t even require you to taste them to enjoy them, evinced by the sangria made crimson and floral with hibiscus and the rum served in a big coconut shell with the restaurant’s name burned onto it.

It would be easy to assemble a meal just from seafood. Lightly breaded salt cod fritters are a little marvel, crisp and greaseless. “We have sardines tonight,” a waiter announces. His raised eyebrows and broad grin are those I’ve seen before, on servers peddling white truffles. We bite, and the reward is a plate of silvery grilled fish with little more than olive oil and fresh cilantro to dress it.

Cuba isn’t known for ceviche. The chef just happens to like it a lot. Indeed, he devotes a whole category to the dish, which relies on sushi-grade seafood and a few choice enhancements per plate. Thinly sliced, pleasantly chewy conch benefits from not much more than razor-thin onions, a stab of heat and a dollop of mashed avocado. Crab cakes don’t scream Havana, either, but here they are, crusty patties formed from lump and claw meat and made tropical with a fiery mango salsa. It’s the chef’s way of reminding diners where they are, he says: “Hi, Chesapeake Bay.” (Also, he adds, “My girlfriend is from Maryland.”)

Ropa vieja is a source of pride in Cuba. Here, the tomato-stained, sofrito-stoked “rags” of shredded beef strike me as wet enough to border on soup. A better ambassador for the island nation is found in pork roasted to collapse and delicious with bitter orange and crisp panes of skin. It’s hard to find faults here. But if you’re trying to winnow the many choices, feel free to skip what’s ordinary, such as manchego cheese and charred red peppers with bread slices. More room for a juicy empanada, or more pork anything!

A tiny Cuban flag waving from one of the lone sandwiches on the menu announces El Cubano, split so that its many layers of ham, cheese and pork are visible. The bread, pressed so that it’s crisp and black in spots, can barely contain the filling, which acquires a nice boost from some smoked chile mayonnaise. Flag or no, your taste buds will stand at attention.

Dishes for two showcase whole grilled branzino; a brisket made tantalizing with garlic, lemon, cumin, chiles and softened onions; and rabo encendio, what the chef calls his favorite dish: oxtails marinated in rum, hot peppers and soy sauce, braised for a day and finished with fresh oregano and orange. (The seeming simplicity in much of this food belies the attention and labor poured into them.) Like the other entrees designed for sharing, the oxtail is served in a raised round pan. Once the featured meat has been portioned out, a server suggests adding rice to the empty pan and stirring it around so that the remaining oil and tasty bits become one with the side dish. Do not miss the opportunity to experience what becomes the best rice for miles. The consistency of the food is thanks to a loyal cadre of cooks, most of whom started as dishwashers and worked their way up under the tutelage of Mendizábal.

The menu tends to stick to your ribs. See that one rib can handle dessert. The sugar-dusted churros are wicked. They defy gravity — and, be forewarned, any post-holiday diet. The warm wands of fried batter enjoy the company of whipped cream lightened with lemon. Creme brulee flavored with caramelized pineapple takes a French classic on a tropical detour, and your day is better for it.

A key ingredient in the success of the restaurant is service. The staff seem to know the food as if they committed the recipes to memory, and they present the chef’s dishes with the pride of investors. You could call them mini-Mendizábals: real catches.